TOWARD A REDISCOVERY OF ‚FEMININE‘ PRINCIPLES IN ARCHITECTURE AND PLANNING 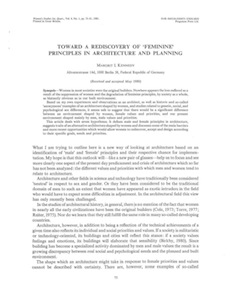 Women in most societies were the original builders. Nowhere appears the loss suffered as a result of the suppression of women and the degradation of feminine principles, by society as a whole, as blatantly obvious as in our built environment. Based on my own experiences and observations as an architect, as well as historic and so-called 'anonymous' examples of an architecture shaped by women, and studies related to genetic, social, and psychological sex differences, it seems safe to suggest that there would be a significant difference between an environment shaped by women, female values and priorities, and our present environment shaped mainly by men, male values and priorities. This article deals with seven hypotheses. It defines male and female principles in architecture, suggests traits of an alternative architecture shaped by women and discusses some of the main barriers and more recent opportunities which would allow women to rediscover, accept and design according to their specific goals, needs and priorities.