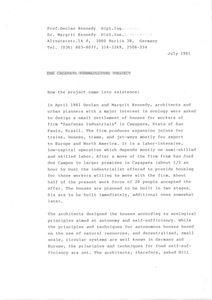 In April 1981 Declan and Margrit Kennedy, architects and urban planners with a major interest in ecology were asked to design a small settlement of houses for workers of firm "Sanfonas Industrials" in Cacapava, State of Sao Paulo, Brazil. The firm produces expansion joints for trains, busses, trams, and jet-ways mostly for export to Europe and North America. It is a labor-intensive, low-capital operation which depends mostly on semi-skilled and skilled labor. After a move of the firm from Sao Jose dos Campos to larger premises in Cacapava (about 1/2 an hour by bus) the industrialist offered to provide housing for those workers willing to move with the firm. About half of the present work force of 20 people accepted the offer. The houses are planned to be built in two stages. Six are to be built immediately, additional ones somewhat later.