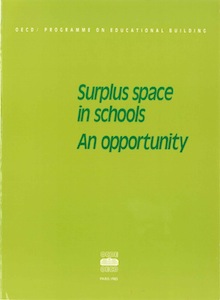 School buildings with surplus capacity and unused accommodation are not a new phenomenon. Underutilised or eventually empty schools have always tended to result from migratory movements which are a feature of the evolution of modern societies. Until recently surplus school capacity tended to be concentrated in rural areas. In urban areas it was considered a marginal phenomenon of rapidly growing educational resources.