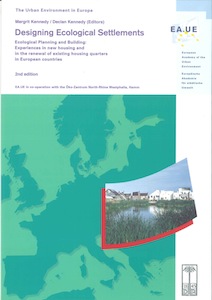 Nowadays, in contrast to the situation at the beginning of the ecology movement - the late seventies and early eighties, there is general social consensus that ecological planning and construction should not be a short lived whim but rather long term objectives for all groups involved in building. There is no shortage of concepts, planning and proposals. However, concrete examples of the magnitude required - i.e. anything over and above a detached house or a small settlement of 10 to 20 dwellings - these are still few and far between. The vast majority of new building, and also of urban renewal measures, comes nowhere near putting into practice the ecological design principles which could be implemented in today's world. Settlement design is driven primarily by what are believed to be commercial market laws which do not place a premium on ecological criteria. But as long as ecological settlement design remains out of the mainstream - contained in model projects for a Building Exhibition here, an Expo there - consumption of resources will continue to proceed at a level far beyond the desired reduction, i.e. the one called for in Agenda 21 of the World Climate summit in Rio.